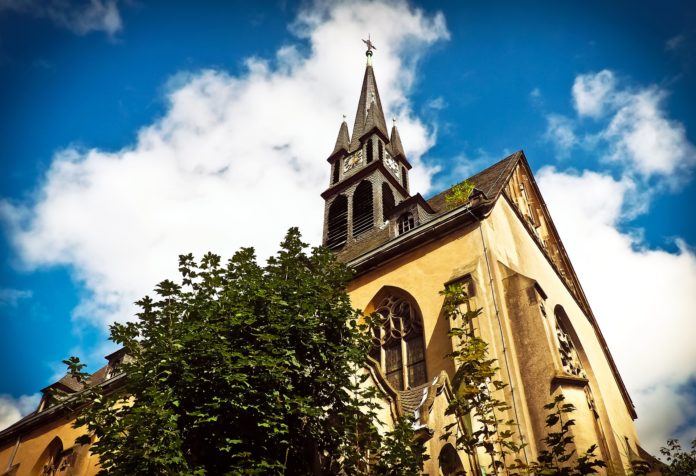 Today, the large churches in Germany seem to be free riders at the state’s charge: The state educates teachers and priests, funds religious education at public school and funds together with statutory insurances in great part their welfare organizations Caritas and Diakonie. The list goes on and on. It seems the churches got comfortable in the state. In fact, the opposite is true: The state claims for itself what the churches have built up in the past.

The first European universities have been church institutions. Paris, Bologna, Oxford and Cambridge originated already in or at the end of the 12th century CE. Unlike Chinese academies for the education of state officials, the mandarins, the church universities weren’t spaces for mere production of tradition. They neither were spaces of pure prayer and retreat from the secular world. Quite the reverse: The theology at the universities has been so speculative that it developed into the driving force for the emergence of science. Despite the claim to absoluteness of the church, freedom developed at its universities, which enabled people to defy the church.

Martin Luther, John Calvin, Galileo Galilei and Giordano Bruno were graduates of church universities. Over the centuries the church has – respectively in plural later: the churches have – lost their influence at universities. What the church has built up, the state has taken over nearly completely. Today, in Germany some criticize that theology is taught at state universities at all. And they regard that as a violation of freedom. They overlook, that conversely the expanding state has constrained the freedom of the churches at the universities.

Earlier than the German state the Roman Catholic Church and the Evangelical State Churches took care of the social question. They fought for worker right in the industrializing society (the same is true for the Social Democrats of course). Both churches founded several hospitals and associations for care of the poor in the 19th century. From the cradle to the grave associations evolved in which Catholics in particular shouldered responsibility for themselves and other, independent of the Protestant dominated German state(s). This engagement was recognized politically during the Weimar Republic – which is not surprising as the Social Democrats formed several government coalitions with the Catholic Center Party. The system of state welfare in the kaiserreich evolved into a developing modern welfare state. Church institutions benefited from this trend.

At the beginning of the Federal Republic of Germany, state funding for non-state initiatives in welfare expanded significantly as subsidiarity was a chosen leitmotiv of the social market economy. What can be done locally and by non-state initiatives should not be done by state and municipalities. However, where cash flows, desires arise. According to this politics imposed more and more restrictions on church welfare. When in contrast to political opinion value perceptions of the churches should no longer apply to institutions which are at least in part funded by the public – some demand that. But this would in fact be a hostile takeover.

What applies on universities and hospitals, applies to senior citizens’ homes, kindergartens, schools, care for the poor und much more as well: The churches have initiated them, built them up and maintained them. After their services have proven themselves successful, the state supported them financially more and more. By this the desires grow and the state confined the freedom of the churches in their own institutions more and more – when the state has not taken the institutions over completely. A policy like this is in deep contrast to Open Religious Policy. The state has to support the initiatives of its citizens irrespective of their religion or philosophy. The state may engage in welfare and education. It has to engage when there are deficiencies or some groups of the population are excluded.

However, the state has to abstain from taking over initiatives of the citizens. The intents may be well-intentioned, but such a policy constrains the freedom of the citizens. When we next time are upset about church institutions funded partly by the public, we should not instantly cry for a takeover. We should build alternatives ourselves. In many countries, we have the freedom to do so.