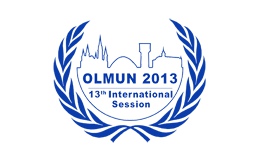 On June 6th the Chairman of Open Religious Policy Forum Sven Speer presented the idea of Open Religious Policy at the Oldenburg Model United Nations Conference. Speer spoke to the Third Committee of the General Assembly, the Social, Humanitarian & Cultural Affairs Committee, which was constituted by 120 pupils from Germany, Poland, the Netherlands, Turkey, the United States and other countries. This year’s topic was ‘The Prevention of Discriminatory Practices towards Religion’.

In the discussion following the speech the participants asked questions about how to deal with religious clothing and whether contraceptives should be provided by non-state actors against their will. About 700 pupils have taken part in the conference. More information on the conference you may find here: http://www.olmun.org/

7. August 2017
Excerpt: "Nine out of 10 people will mention secularity as a defining characteristic of contemporary societies when...
Read more
© Forum Offene Religionspolitik e.V.